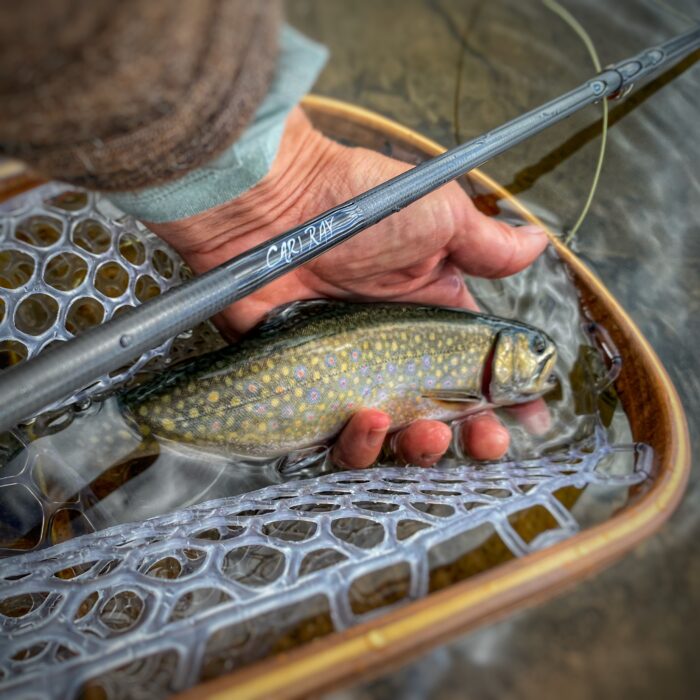 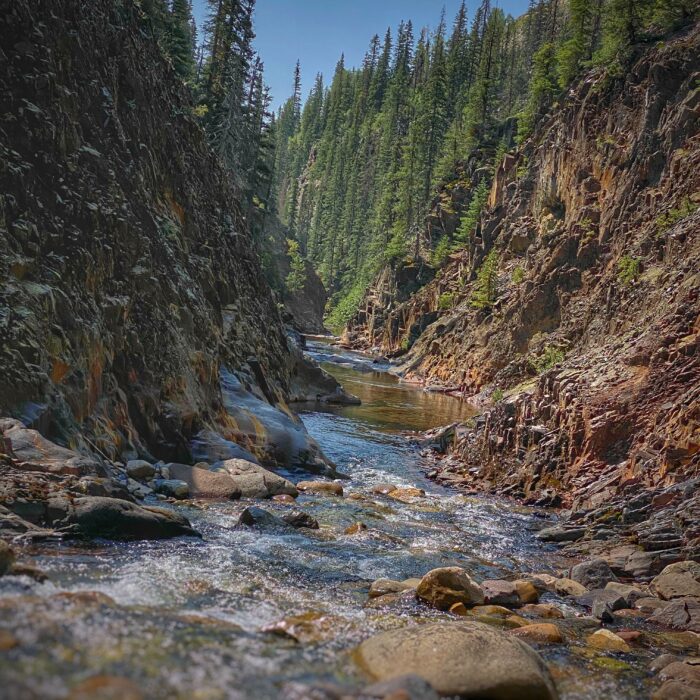 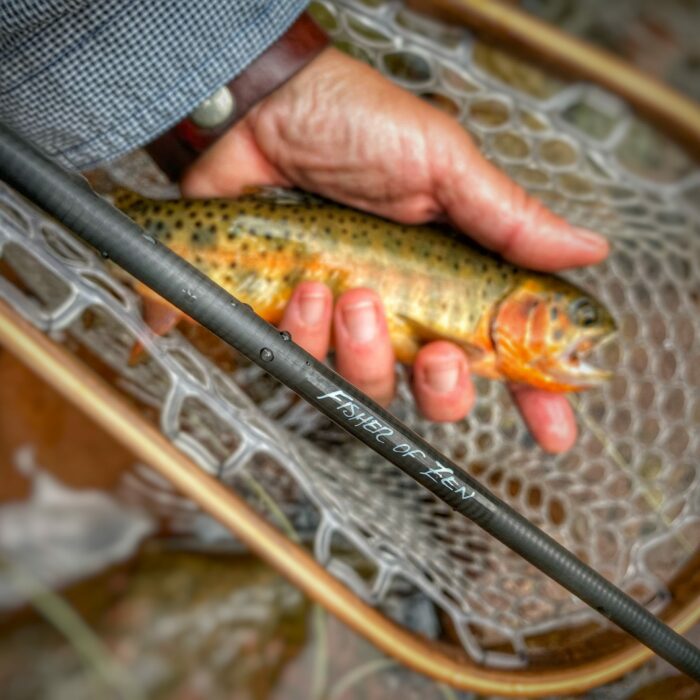 I’ve been following the work of JP Ross for a while now. I first ran across his Muir pack rod, a 7-foot-5-piece fiberglass 3wt, several years ago when looking for a backpacking companion to chase wild and native trout deep in the backcountry. I’m a sucker for a lightweight glass rod, and I still plan to get one in my little paw at some point.

Anyhow, I digress. My recent pursuit of a rod to practice for Fly Fishing International’s Certified Casting Instructor Exam lead me to call the shop with some questions. To my surprise, the man himself answered the phone and we had the first of what have now been quite a few great conversations…mostly about fly fishing and a little about life (it’s all the same, you know). When you run across a kindred spirit it just sorta goes that way…like old friends who’ve just met.

I now have nearly every rod he makes—on my wish list—not just because the designs are solid, but also because I resonate so much with his philosophy around the importance of spending time outdoors. He builds these tools not just for precise execution, but with a view to enhance the experience of the caster. He’s a ZenFisher for sure. Buying 6 or 8 fly rods, however, is a bit much all at once. But I had to start somewhere. And when I read a little about his new rod with a split personality, The Peacemaker, I surmised it was the perfect tool for my trip to the San Juan Mountains of Southwestern Colorado.

The planned fishing excursions included both chasing native fish in creeks above 9000ft, where conditions can be tight and technical, as well as hiking up even farther to fish the Alpine lakes that feed some of them, where I wouldn’t have the benefit of a paddle craft or float tube for better access. So what makes The Peacemaker the perfect rod for this scenario? Well, it’s not really a rod, it’s rods (plural). While it can be ordered in either an 8ft 3wt in 3 pieces (803-3) or a 10.5ft 4wt in 4 pieces (1054-4), it can also be ordered in a configuration where both rods share the top two sections. Add one butt section with grip to them, and it’s the 803-3. Add a section with additional stripping guides and a different butt section instead, and it becomes the 1054-4. After fishing both configurations for a few weeks now, my mind is kinda blown. And I’m no stranger to high-performance fly rods.

The shorter 3wt has become my new favorite creek rod for the sort situations I’ve been fishing recently. Since I’m packing it in to waters unknown to me, I take a reel spooled up with 3wt line and an additional spool with 4wt line. If the conditions call for shorter casts, I use the WF4F (weight forward 4wt) to load the rod in a little closer. If, conversely, I’m in a situation with crystal clear high-mountain runs packed with wary, wild quarry and nowhere to hide, I string up the WF3F and the thing becomes a monster of accuracy at distance. Seriously, I can place a dry fly right in the pocket at the head of a run from farther than is even legitimately fishable.

I learned that the hard way as I failed to hook up on several solid eats in a row when casting far up a narrow canyon where closer access wasn’t really practical. But that just wouldn’t do, and I am not easily dissuaded by impracticality. I wanted to make sure the misses weren’t just my poor timing. So I said a little prayer, put the rod between my teeth, and using the full compliment of hands and feet, shimmied across a slim ledge of slickrock alongside the pool to gain another 10 feet or so. Yup. That was the ticket. The next drift produced as solid take and set and brought a beautiful wild brook trout to hand. So it seems my fishable distance with this rod is limited only by the physics of the set with an 8-footer, not by our (my and the rod’s) ability to place an accurate cast. Sweet.

In theory, the 10.5ft version sounded like a dream for the alpine lake game. And it is in practice as well. But it did take a little adjustment to get into the rhythm and adjust my casting arc and pace to the pace of the rod. Sort of the way that a paddle craft has a terminal velocity. No matter how hard you paddle, your top speed is ultimately dictated by the specs of the boat. This rod asks, no, insists, that you go easy and SLOW THE HECK DOWN. Maybe he should have called it “The Pacemaker!” Nope, it doesn’t like to be pushed one little bit, but that’s just fine, it doesn’t need to be. It’s the poster child for letting the rod do the work. Relax into it, and long stable loops are like breathing. It can certainly handle 4wt line, which I’d recommend for light streamers and nymph/indicator situations and will be putting it to that use in the wide, braided rivers of Texas Hill Country soon enough. But I’m just smitten with it strung up with WF3F for dries on still water.

I have distance for days and the most delicate presentation with the long leaders used in those situations. In this case, the extra rod length also makes setting the hook more feasable at distance. It’ll pick up a truckload of line, too, which means the fly spends more time on the water (you know, where the fish live) and less time in the clouds (you know, where I live). While I haven’t used it in this application (yet), I imagine the extra foot-and-a-half over the standard 9er will make it a great kayak fly fishing rod as well. While the shorter rod is still my creek darling, casting this longer configuration is downright addictive.

We recently traversed the 4×4 access road up to a trailhead at 11,000 ft and then hiked the additional 2.5 miles of distance and 1500 ft of elevation up the mountain to a cluster of alpine lakes. I hiked with the 8-footer in hand to fish the creek as we ascended while the 2 sections of the 10.5-footer were strapped to my pack so I could make the switch at the lakes. The sections are a little long for what I typically prefer in a “pack” rod, but the versatility is worth the larger form factor to me in that sort of scenario. Is this an Appalachian backcountry rod? Probably not. But it wasn’t designed to be. JP has built his brand on small stream rods for the short game and has plenty of options that fit that bill, namely the Muir and his Beaver Meadow series in carbon and s-glass. The Peacemaker is another animal entirely.

Ross isn’t just a rod builder, he’s a rod designer. And “designer” is an important distinction to note. There are lots of “builders” who wrap and build rods on blanks they purchase from other manufacturers, which is cool. But that’s not the case here. These tapers and composite applications are designed and developed by JP, manufactured, and then wrapped/built in his shop. Not only did my fly rod sections show up beautifully appointed with my requested and preferred down-locking reel seats in burled wood and coordinating agate stripping guides, JP took it upon himself to add my name to the 10.5ft butt section and “Fisher of Zen” to its 8ft sibling. Nice, thoughtful touch. My understanding is that he designed the longer rod specifically for a canoe float on an Adirondack river where conditions called for dapping. It has since become a go-to rod for many anglers (like me) as they have continued to push it well beyond its intended purpose. I’m not sure if that’s because they want to see what it can do or because they just don’t want to put down a rod that puts such a goofy, nearly embarrassing grin on your mug every time you cast it.