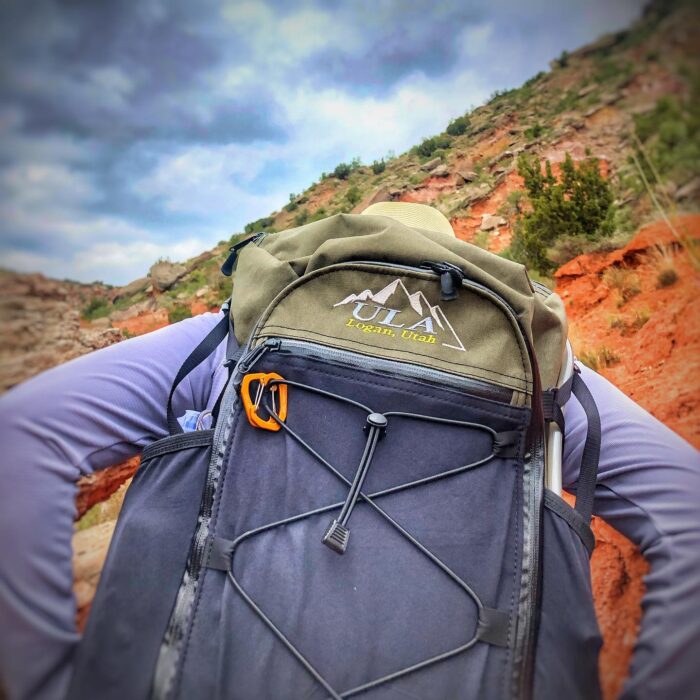 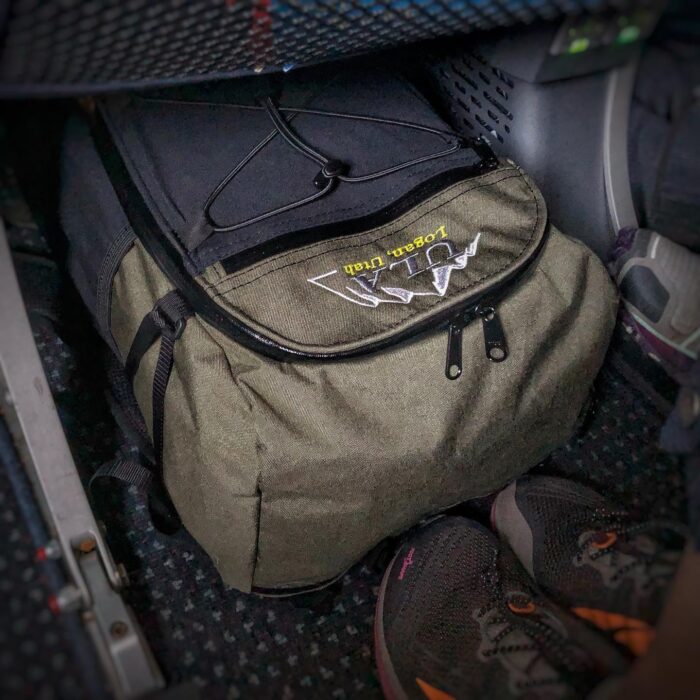 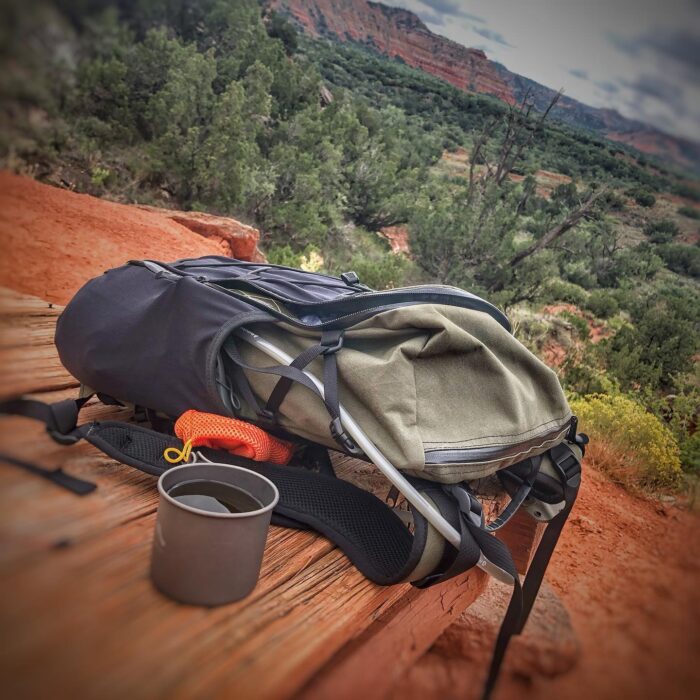 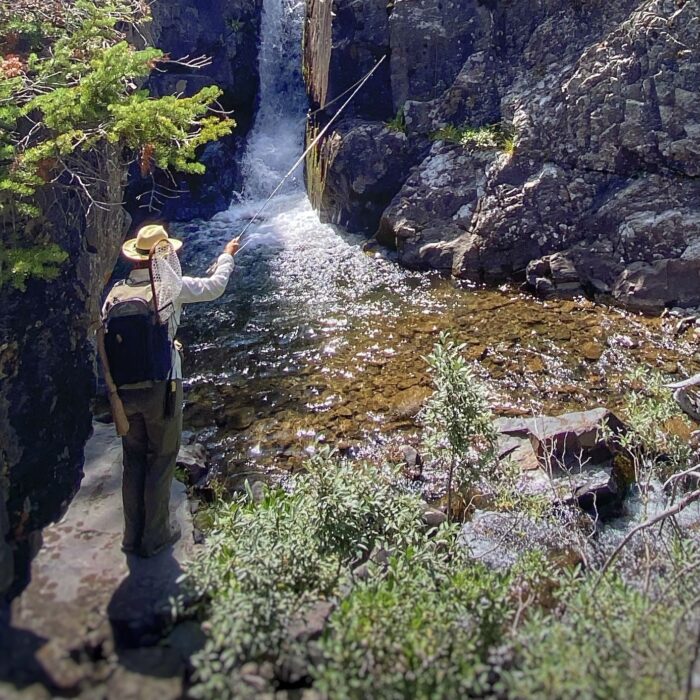 A while back, I reached out to ULA Equipment about building a custom pack for me based on what has become their Dragonfly Pack. At the time, an earlier version with slightly different specs and dimensions had been released as their “Everyday Pack”.

My idea was for it to be “one pack to rule them all.” We were full time on the road touring (drives and flights) AND hiking/exploring, so I wanted a pack that could go from travel pack to daypack to backpacking pack to gear hauler. It had to be light, tough and versatile! A tall order, for sure. I have a bad habit of asking a little too much from my gear in general, but living in a 200-square-foot Airstream didn’t really accommodate having 4 different packs. It needed to be oversized daypack/ultralight backpacking pack sized and also be able to haul over 20lbs safely and comfortably for music gear sometimes and extra water when exploring arid landscapes. Oh, and it needed to fit under an airline seat since my guitar counts as my carry on when touring so my “personal item” has to handle everything else for quick trips when not checking baggage.

As it turned out, their lead pack designer was already working on something in that vein. I made a few tweaks. Heavier fabric, removable padded/pocketed hip belt, heavy-duty compression up and down both sides, and load shifters to snug heavier loads against my back (now standard on the new, larger volume version called the Atlas Pack). Some folks think load shifters only belong on bigger, framed packs. I just like being able to snug the load in against my shoulders in all but the most ultralight short hike situations.

So about a week later it was in my hands and quickly on my back. Within the first month or so she was stuffed under an airplane seat and drug around New York for the Brooklyn Americana Music Fest and trekking all over the Southwest…from Santa Fe to Moab to The Grand Canyon and more. Overall early impressions were pretty great.

There are several things I really dig about the pack, and a few annoyances as well…there is no perfect pack. True to ULA form, I love how comfortable it carries, even when loaded. The “modular” frame system that consists of removable foam sheet and aluminum stays that can be taken in and out of the “laptop sleeve” gives you several options for support and back panel rigidity. Nice. Frankly, though, there is enough material/rigidity in the back panel/sleeve itself to accommodate all but the heaviest loads and/or long trail days. The loops to add a bungee across the front are certainly welcome when it’s time to dry out wet gear. The integrated top pocket is great for accessing wallet, phone, snacks, etc. while traveling by air or when taking a rest on a hike. That said, unlike the original Everyday prototype, it shares volume with the main pack body, which gets frustrating when you are left robbing Peter to pay Paul as you move gear around to get the most efficient load.

The hip belt is removable, but unlike many ultralight packs with a removable 1″ webbing belt, this is a legit, padded option that fastens pretty quickly and easily with two attachment points on each side. This makes integrated hip pockets as well as true, secure load transfer when carrying heavier loads possible. I just leave it off when I want to streamline it as a travel pack or for day hikes where I’m carrying a lighter load. The hip belt pockets are also nice added volume for quick access while trekking (snacks, tools, headlamp, etc.) though they could be a little deeper as far as I’m concerned. They are certainly big enough, but if I had it to do over again, I’d make them a bit bigger and choose a lighter fabric than the VX50 of the pack body as it’s pretty stiff for a zippered pocket.

I love the access of a panel-loader, especially for travel, but it isn’t the best option for overstuffing on an overnight hike. Top loaders shine there. It also restricts the size of the front mesh pocket on the sides where it meets the perimeter zipper and across the zippered top (necessary for securing items in the stretch pocket while traveling but a bit of a pain on the trail as it’s not very “overstuff friendly”). I also get a little more nervous really ratcheting the compression as it seems to put a lot of pressure on the water resistant u-shaped panel zipper. To ULA’s credit, though, it has yet to fail me despite the apparent strain.

One of my favorite features are the oversized 4-way lycra stretch side pockets. These babies are CAVERNOUS when in use, but shrink down to near nothing when empty, allowing them to be entirely out of the way when using as a daypack or travel bag. In fact, though the design allows for internal water bladder carry, I found I could load my slim 1.5L Hydrapak bladder in one of them and balance out the other with a couple of repurposed 1L disposable bottles for ease of refill and to avoid the risk of a leak soaking the contents of my pack body when needing to carry lots of H2O. Speaking of the side pockets, the heavy-duty web compression straps go all of the way down the sides of the pack INSIDE these pockets. If I had it to do over again, I wouldn’t make that choice. The combination of structure provided by the stiffer VX50 and the fact that this safety gal always carries components of the “5 Cs of Survival” (more on that another time) even on a day hike, I haven’t really needed to compress it much. Also, the straps become a hang-up hassle when stuffing things in the side pockets on the go.

It’s always a risk when you try to design something to serve so many purposes. Often it ends up serving none of them well. Not in this case. All in all, my nitpicks are just that…especially when I was demanding so much utility from one pack. I made my wish list knowing it was probably asking too much, and this little pack just said “hold my beer.” In fact, though she pretty much amounts to a customized Dragonfly pack these days and there is now even that larger version called the Atlas, I call her the “ULA EveryWay” because she does so many things so well.

One comment on “One Pack to Rule Them All? The ULA Dragonfly Backpack”