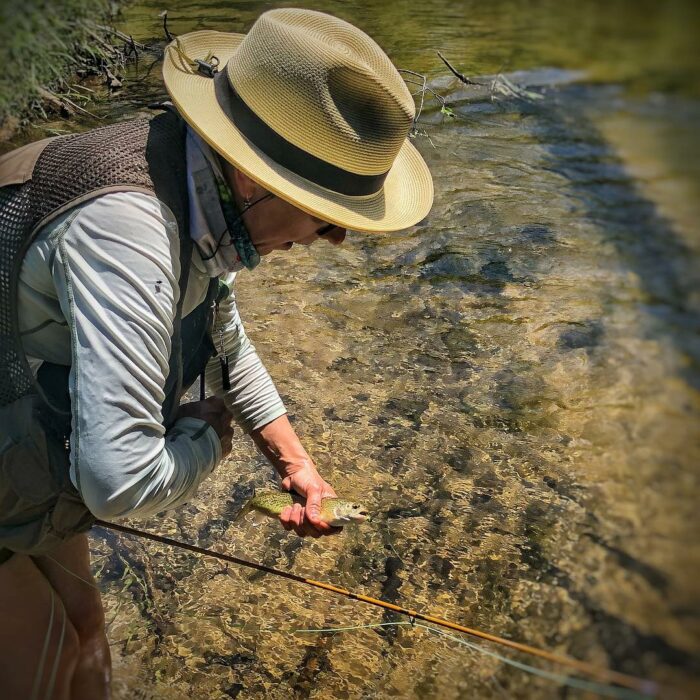 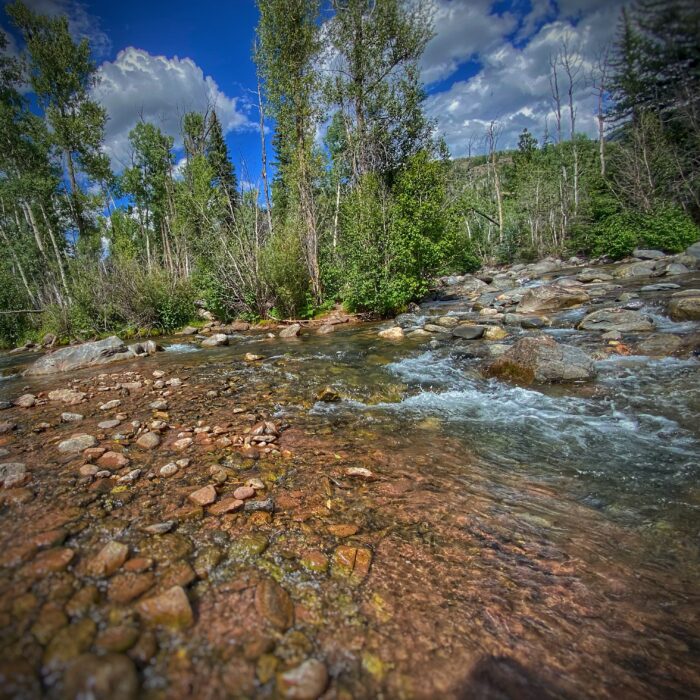 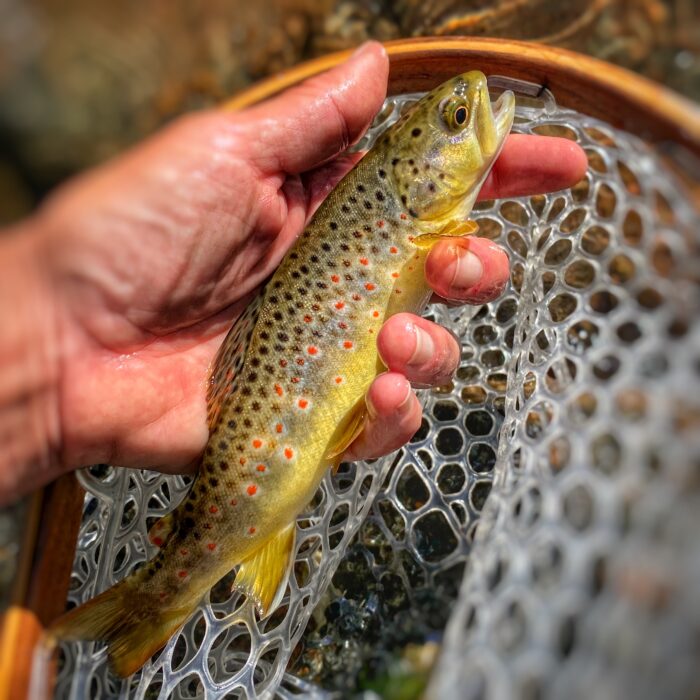 There's nothing like a first-time feeling...except maybe an experience that takes you right back to it.

It was a wonderful, restorative week spent in the upper regions of the Michigan mitten to celebrate my birthday. But there had been something I’d been chasing all week that, as of our last full day, had eluded me. I’d been fishing all my life, and fly fishing for several years by then—mostly on our Southern Indiana lakes, rivers and streams for warm-water species. I knew how to find and land most of our Hoosier-resident fish spin casting and on the fly. But I’d always wanted to stand in a river and land a wild, native trout on a fly rod.

Over the course of our stay, I haunted fly shops, watched local anglers, waded rivers, floated rivers, chased hatches and threw just about every bug and streamer pattern and size you can imagine to tighten a line on trout—any dang trout!! Though I was still empty-netted, we decided to make our last full travel day more about a river float. So we loaded up and headed for the Pine River, a stretch not guided or even reported by most Michigan outfitters. It’s tight, winding, and fast, with nearly 3 times the fall of most Michigan rivers. And it’s not stocked, nor home to any anadromous (migratory) fish. Only wild, native trout reside in its vastly varied depths. Stand up paddle boards, which was, in hindsight, an “interesting” choice for a fairly technical paddle on a river with class one rapids and lots of sub-surface debris, were the craft of the day, and while fishing wasn’t really on the menu, I did grab my trusty little glass 3-weight and laid it on the deck down the middle of the board between my feet. (Come on, being on water without a fishing rod is like going to a jam without an instrument).

45 minutes or so floating past the shady, deep waters of some really fishy-looking holes proved too much to bear and I pulled up on a sandbar on the inside of a bend opposite a particularly fine-looking one that begged just a few casts. The Pine is more of a nymphing than a dry-fly-fishing river, especially the middle of the afternoon in June. Never mind that I had none of the fancy dry flies I had scooped up on one of my many fly shop stops. So I tied on a generic-looking, fluffy little bead-eyed bug, made a couple of good back casts to get the distance I wanted, and gave it a toss up and across the river—let it drift—stripped it in. Nothing. I wasn’t even certain I was doing it right, and after a week of fervent failure, my expectations were anything but high. Another cast. Nada. Okay, one more.

Let it drift—let it swing—start stripping it in. And then bang, I felt it! That glorious tug at the end of the line that happens only when you’ve hooked a live one. And when that little sweetheart leapt from the dark, swirling water, I swear my ticker skipped a tock. D who was wading just around the bend, initially mistook my non-lingual squeals of joy as cries for help. Fortunately, I realized quickly that I sounded as though I might be drowning and shouted “I CAUGHT A FISH!” And then, with the confirmation provided by a second leap from the water, added “IT’S A TROUT, A TROUT!!!”

Now I’d heard some folks say that there was something magical about trout. And while I had long enjoyed the thrill of catching fish, especially on the fly, always thought that sounded a little too woo woo for me. But when I put my shaking, wetted hand under the belly of that little beast, heart pounding, and safely released it back to the boiling, tea-stained depths it calls home, I was a convert, a true believer.

At that point in my life, I’d likely caught thousands of fish. I’d fought tougher and landed bigger. But hooking that first wild trout on the fly standing knee-deep in the chilly water of a crystal clear river, a cloudless sky above, beneath the ancient gaze of the bending pines…that comes as close to the feeling of reeling in my very first fish as a child as I think it gets. And I owed that rehydrated moment of childhood wonder to a little brown speckled fish.

Fast forward to just a few weeks ago in the San Juans of Colorado. It had been a trip full of firsts. First fishing in CO, first above 10,000ft, first Cutthroat trout, first time on the Continental Divide, and so on. Each was a pretty cool experience, and worthy of sharing in due time. But ironically, this part of the story isn’t about any sort of first.

Our time in the colorful state was drawing to a close and the only trout known to inhabit some of the waters I had been fishing that I HADN’T landed was a Brown. And I had yet to trek up to the Cimarron where I had my “Last Dance at Dusk.” There had been so many banner days weaving my way along one pristine stream after another and fishing them until I was tired of catching fish that it hadn’t even occurred to me at that point. Or if it did, I wasn’t too concerned about it.

But on my last overnight backpacking/fishing trip hiking into a yet-unexplored section of what had proven to be a particularly stellar creek, I came upon its confluence with another of nearly equal reputation. This wasn’t the stretch I was aiming to fish, but the falls and seams created by the meeting of two powerful flows just looked to good to pass by. Besides, I was hiking with my JP Ross Peacemaker Sidekick in hand, so why not? Given the fast, turbulent flow, I took the time to tie on a pattern with a little more visibility as not to lose sight of the drift. I settled on a Royal Wulff. (Is it just me, or does anyone else think they look like flies with pigtails?) Once rigged, I made a modest couple of backcasts. One to stretch out the pool of line at my feet, and one to slip a little more to the right distance. Once the fly was hovering just above the base of one of the more aggressive falls, I let it fall to the surface. About 2 seconds into the drift, if you want to call it that, some feisty little beast crushed that cute bug and disappeared into the turbulent flow.

The combination of trout’s considerable size-to-strength ratio and swift current had me convinced I had hooked a monster. Like most creek quarry, once to net, it was clear that by size standards the fish was no trophy. But as my gaze caught the flash of red, gold & brown (no, not “red, gold & green” — children of the 80s just outed themselves) in the late afternoon sun, there was a flutter in my chest. And as I lifted the petite brown trout to release back into the depths of the pool, I swear my hand was shaking just a bit as my thinker caught up with my ticker and flashed back to that first dance with a wild Michigan native.

Maybe the old-timers are right. Trout are magic. And the only thing that comes close to a first-time experience is one that can take you right back to it.